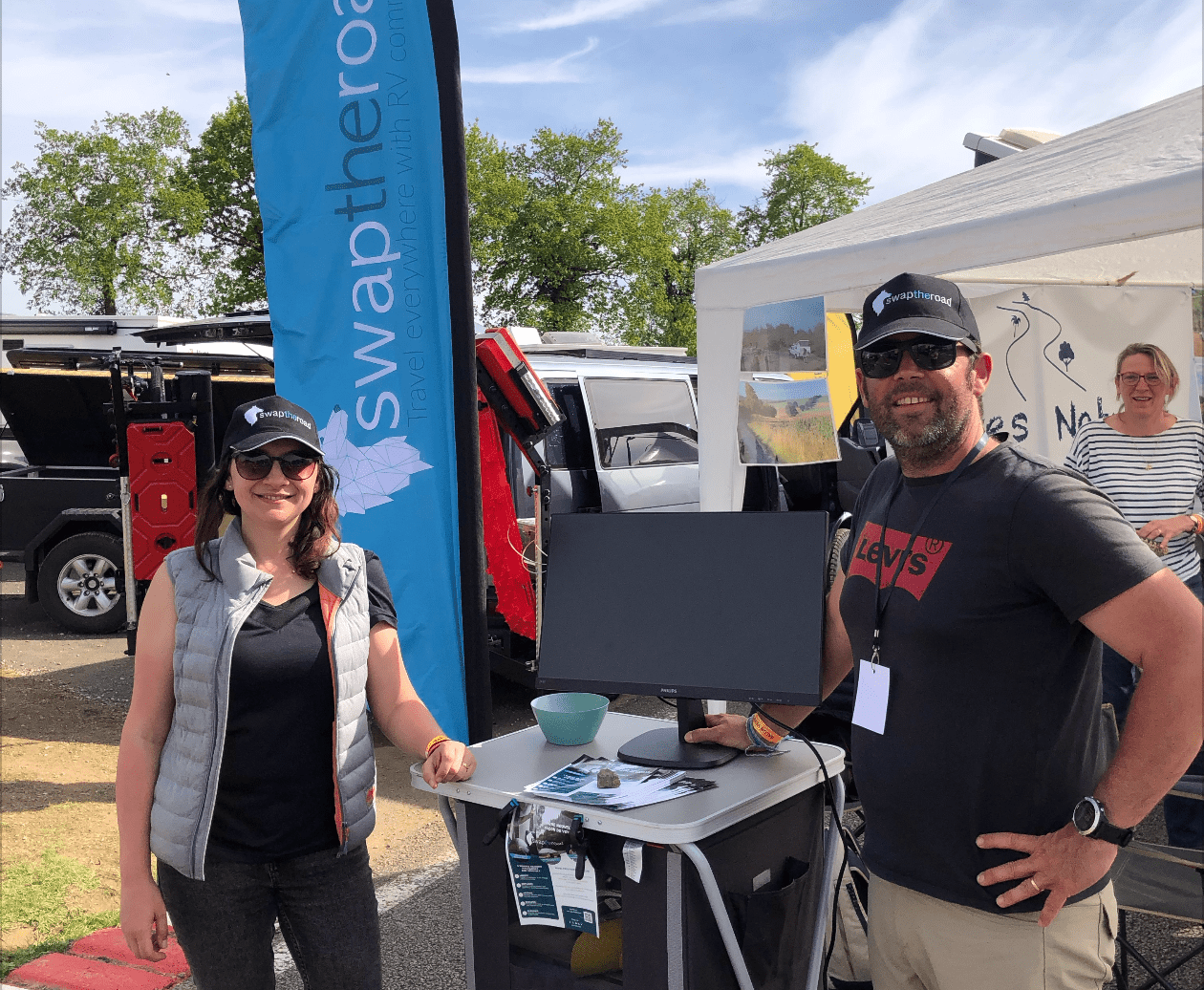 In mid-April, the SVA, the famous French Adventure Vehicle Show, was held.

This open air event takes place every year near Nantes in the north east of the country. It welcomes more than 200 exhibitors and several thousand visitors.

For this 10th edition, we had the chance to join the HTC* network and to hold our first SwapTheRoad booth. With Jean-Louis and all his team, we spent 4 intense days, rich in sharing, meeting and discovering!

It is Jacky Colin who is the initiator of this meeting. After driving his Toyota 4×4 in Africa, he decided to invite all the travelers he met for a huge barbecue… The SVA was born!

This event has quickly become a landmark for anyone who wants to take to the roads in an off-road vehicle. And it must be said that there is something for everyone, from the simplest to the most crazy!

Here, it is not Ikea, no direction of circulation, no predefined route, you walk and get lost according to your desires. You go from an accessory stand to that of a manufacturer, a retailer or an equipment manufacturer… Even a new product or concept.

Check out a pictorial excerpt of what awaits a visitor to the SVA.

The removable cells are like small independent houses that can be placed on a pick-up or a 4×4.

At the exhibition, we discovered a wide range of cells such as the Baïkal, the Touareg, the Tipi 4X4 or even the Aizalai… 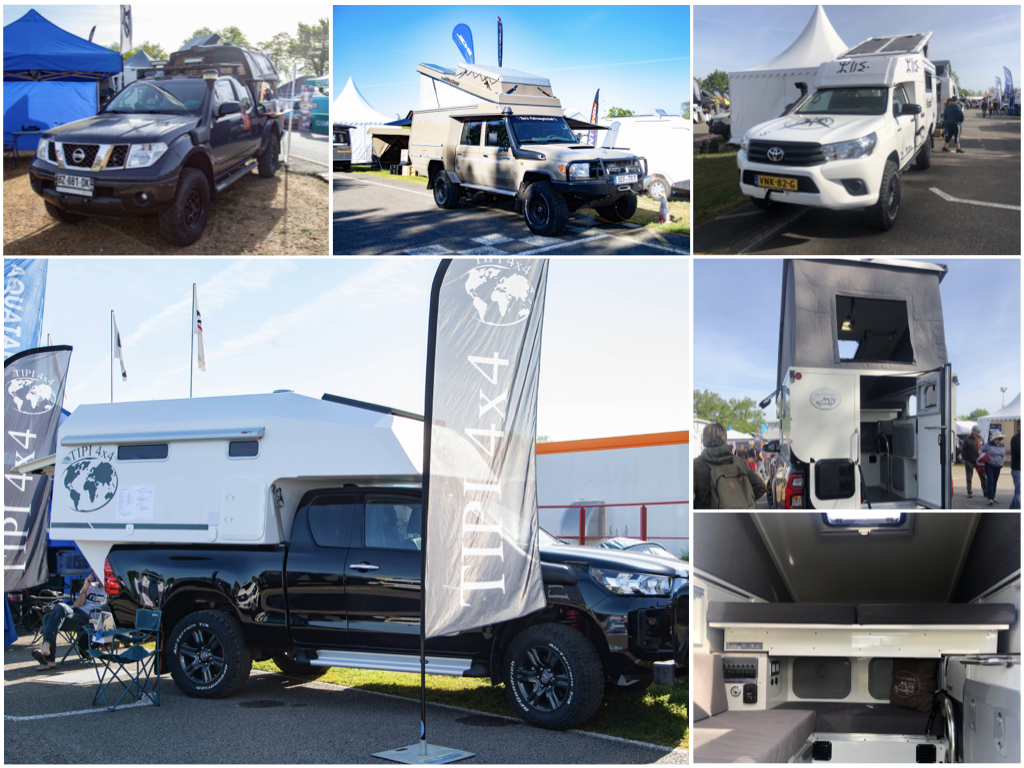 The first TearDrop was designed and built in California by Louis Rogers of Pasadena in 1930. The plans for his “Honeymoon house trailer” were published a few years later in a magazine and allowed other “do-it-yourselfers” to start building their own. They were very popular in the 1940s in the United States. These famous mini-caravans arrive in Europe in a vintage and eco-responsible version

And here is our selection:

– The Carapate imagined by Fabien and Jean-Marie, two French designers

– The Bourriquette made in Normandy by Maxime 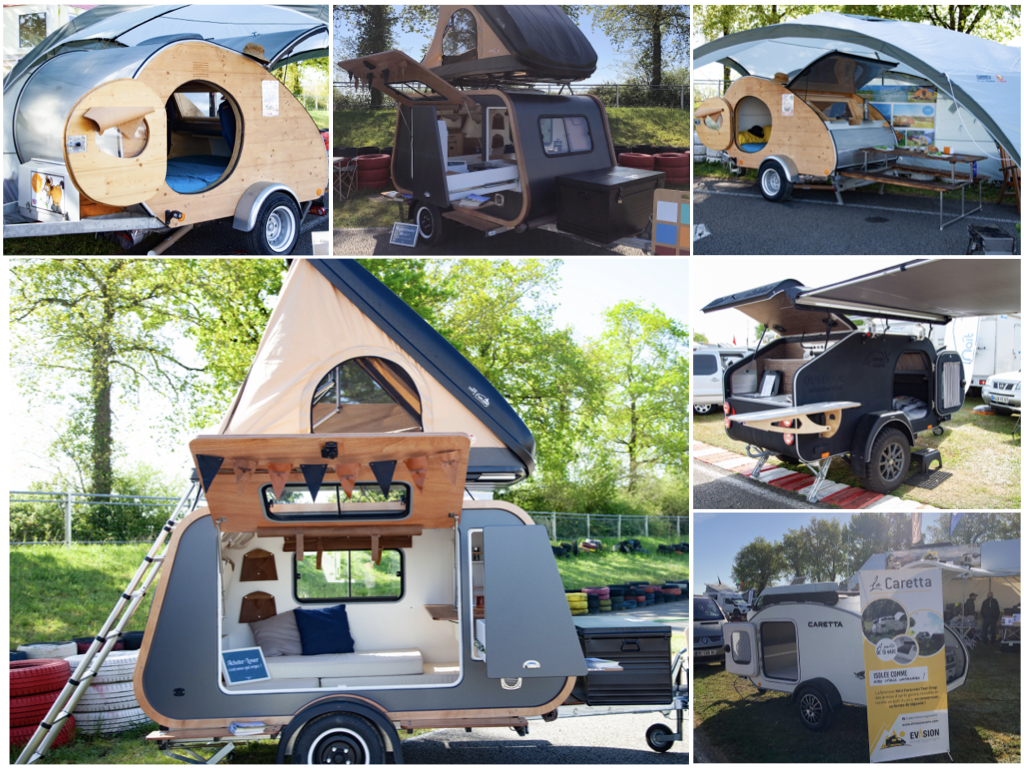 But also, the TearDrop Lifestyle Camper proposed by HTC*. Made in Ukraine, this off-road model is regularly tested in extreme conditions in Northern Europe: 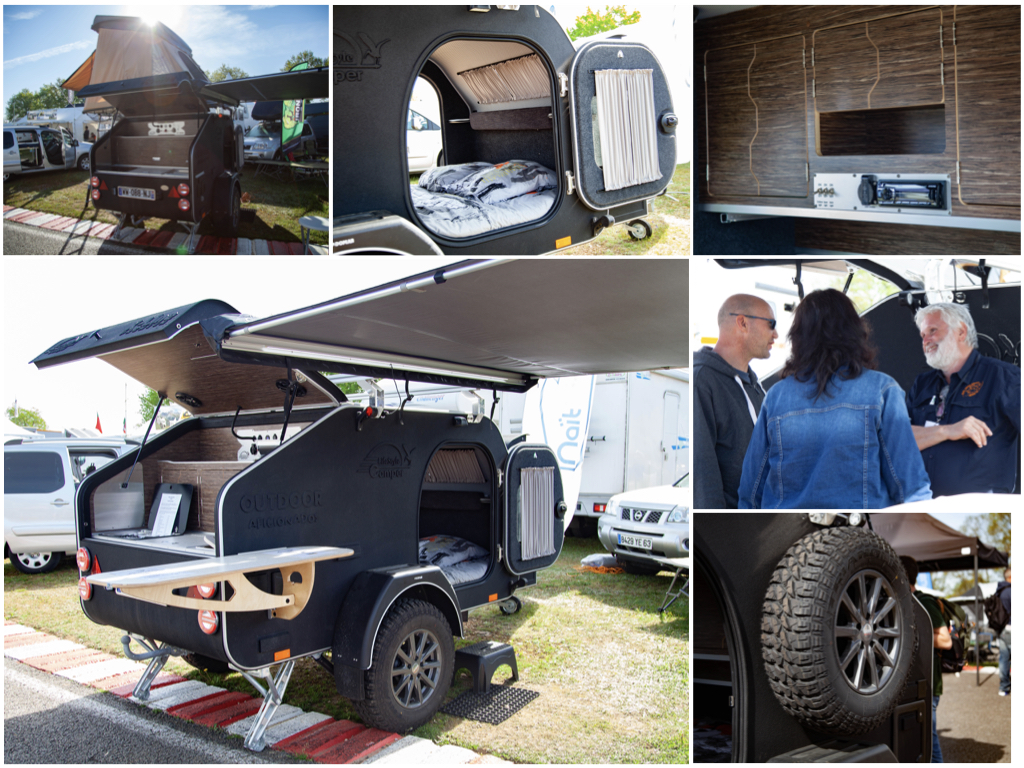 As for the developers, we appreciated the work of the Agence ton camion team. They offer customized services and adapt to the project of each one. They presented on their stand the model of one of their customers. It is a real house and has among other things a cooking piano and a washing machine! Let us specify all the same that this truck does not have vocation to make the turn of the world 🙂 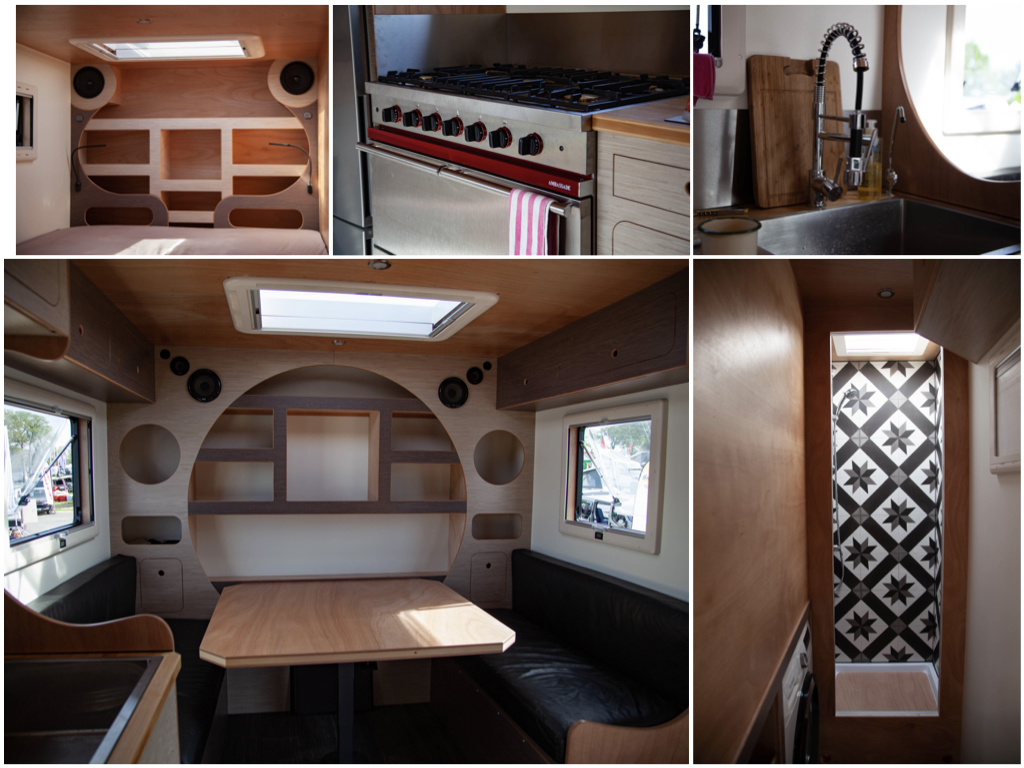 Rider Van imports from Germany the famous used Volkswagen Transporter vans. After fitting them out and equipping them with a pop-up roof, he sells them at attractive prices! 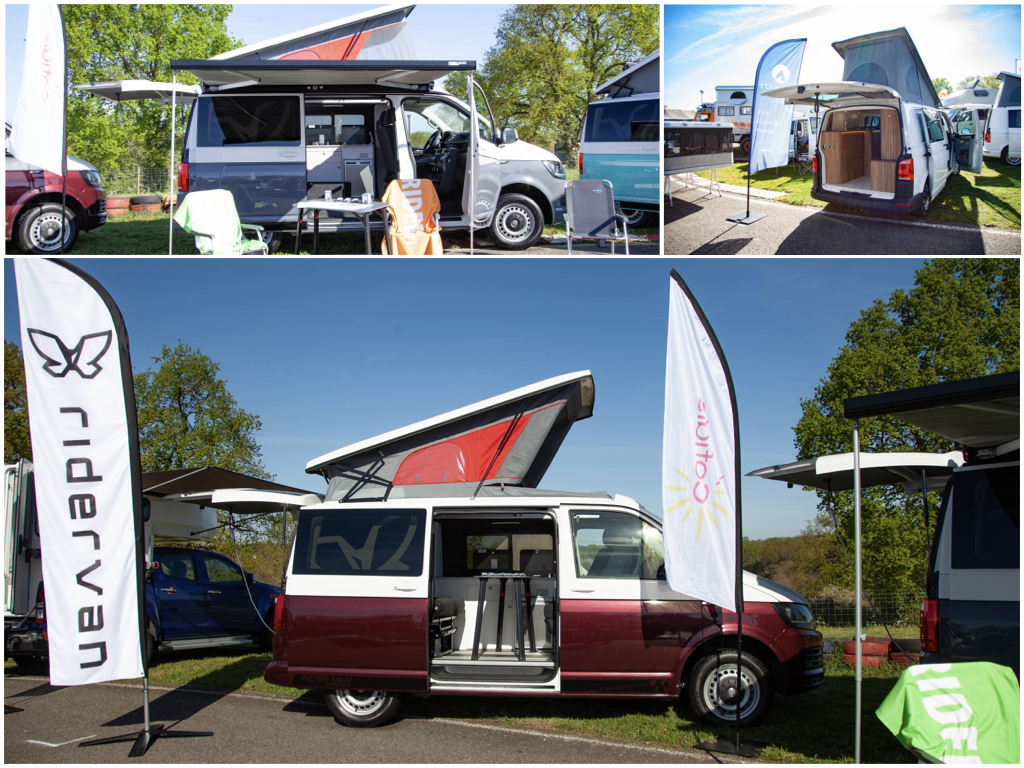 On the HTC* stand, Anthony, the Aménageur Du Bourbonnais in addition to making custom-made arrangements, offers a large number of quality items: crockery, lamps, braziers, tables, storage boxes… and our favorites : Lounge upholstered chairs. They are foldable, not bulky, light and especially beautiful, the only drawback is that they are so comfortable, that we can not leave them! 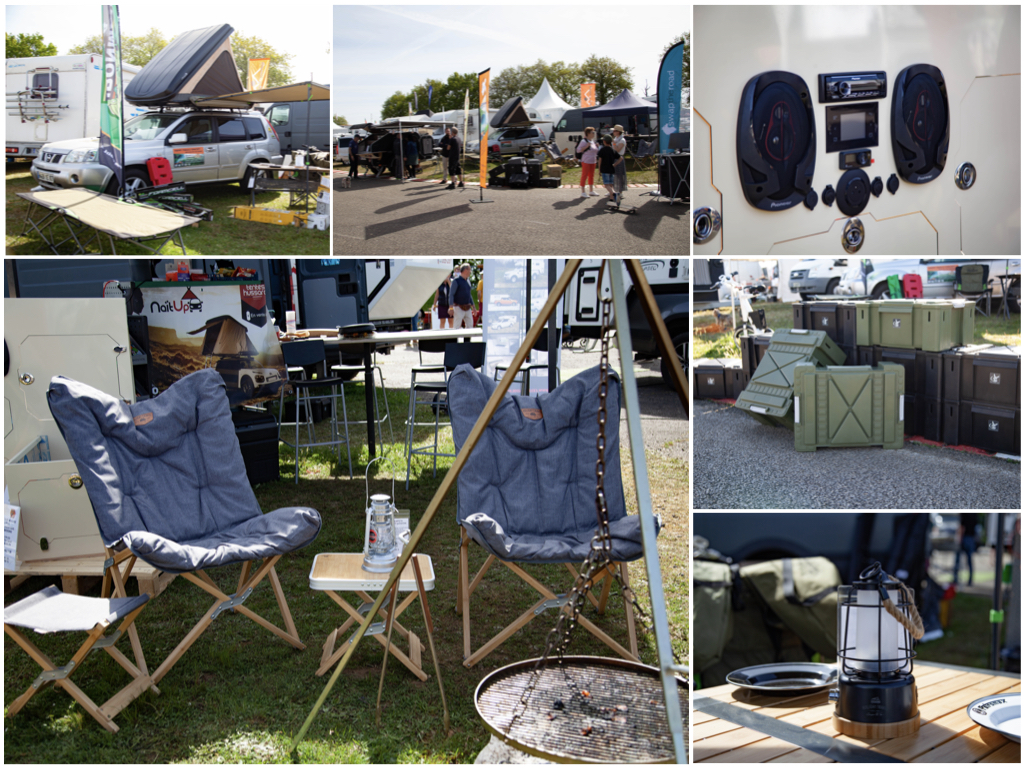 Other stands also sell nice items such as Rodol’f and its clever roll which can be declined endlessly. This product received the gold medal at the Lépine competition (French Invention Competition)! 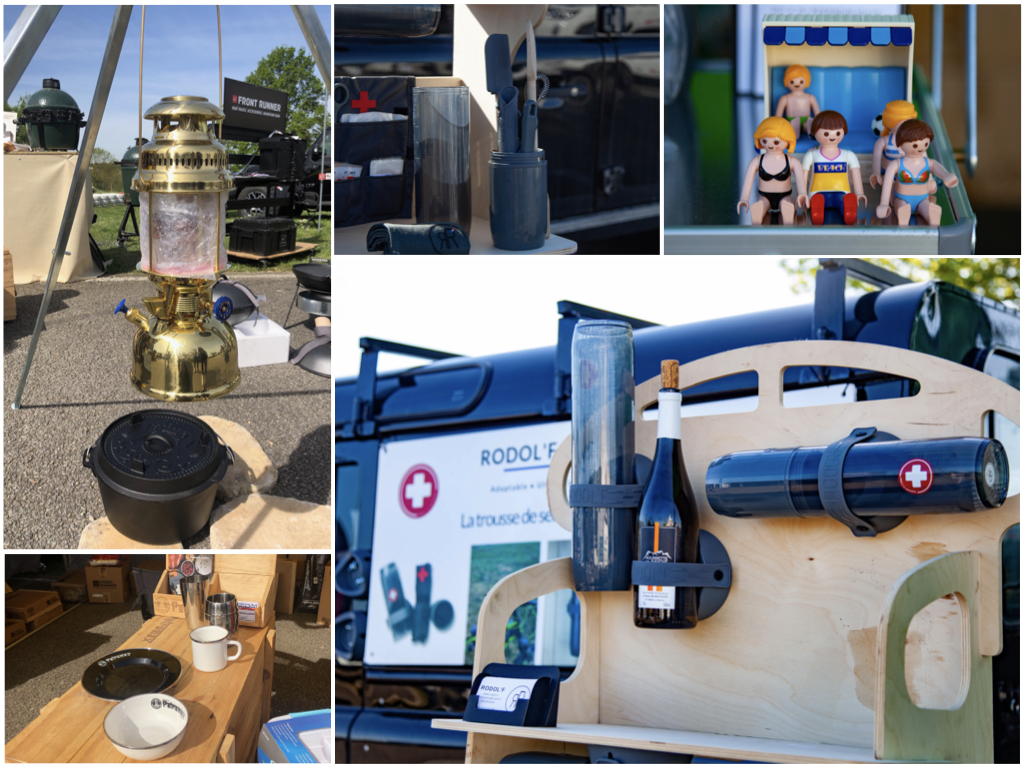 Przemek, Maciej, Paweł and Kasia, a team of Polish enthusiasts launched Escape Vans in 2017. Their concept is based on a box that transforms a car into a camper van by integrating sleeping, cooking and storage space. On the innovation side, we met Alexandre, the co-founder of Etteliote. An original project that turns urine into fog! And then, our SwapTheRoad stand, where we were able to present our first members and the vehicles available for exchange throughout Europe, the Americas, Australia, South Africa… Isabelle and Thierry are the authors of the RoadBooks Pistes et Nature. With their Defender, they set out to reconnoiter the French trails and share their itineraries in the form of guides. “Our RoadBooks have been designed to allow you to discover the heart of our regions by going off the beaten track and traditional tourist routes” they say. In particular, they propose to cross France (from Belgium to Spain) thanks to their route “La méridienne” which is 1300 miles including 500 miles of tracks!

In addition to finding all the professions related to adventure vehicles, this show also has a space reserved for travelers. These nomads come to tell about their latest adventures or explain those to come. They share their experiences, advise some and inspire others. 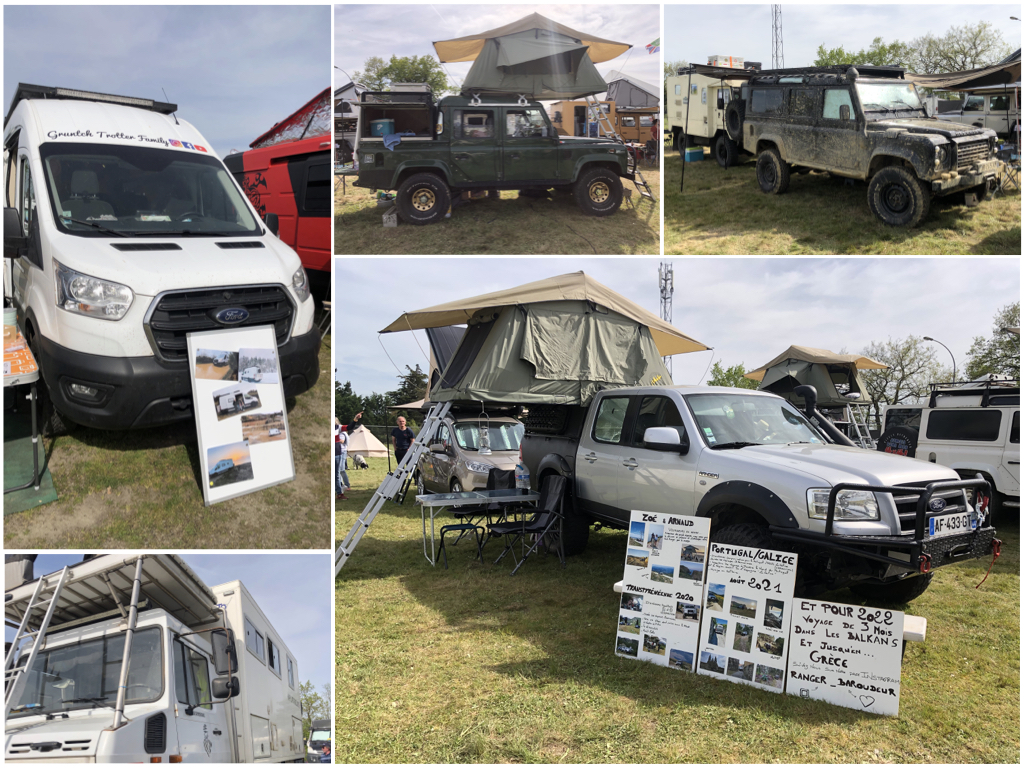 The corner of the bikers and the rally We were wowed by the quantity and diversity of exhibitors.

And if you want to see more, feel free to join us on Instagram. We have a permanent story (profile page) that chronicles this adventure.

After several decades of outdoor leisure activities and road trips, Jean-Louis Goy founded HTC, Happy Trails Concept. His objective: to accompany travelers in their projects, to guide them in the universe of brands & to advise them on the products, equipment and solutions best adapted to their needs.
To do this, Jean-Louis surrounds himself with passionate people, all specialists in their field of activity!
Thus, HTC can provide services, high performance materials and quality equipment… The essentials to succeed in the outdoor adventure of everyone! 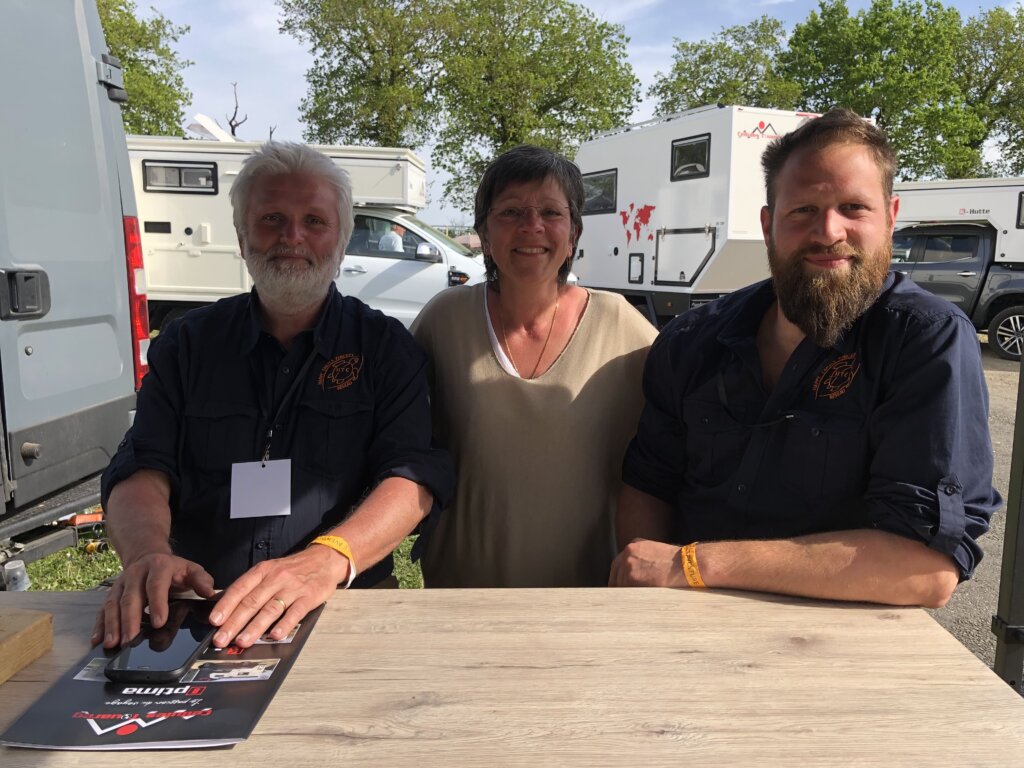 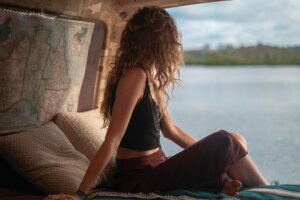 Find out our tips to travel by RV in a responsible way during your vacation ! Nowadays and more than ever, we have to reconsider how we impact our planet everyday. Find out how motorhome exchange is a better way to travel !